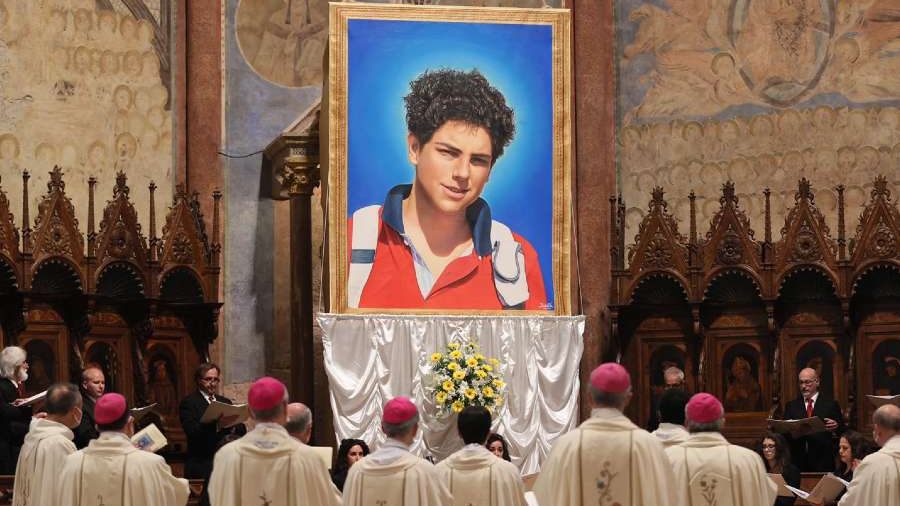 The Most Reverend Columba Macbeth-Green as announced the building of a brand new K-12 Catholic College in Moama, located south of the Diocese. The college has been named in honour of the newly beatified Blessed Carlo Acutis, a 15 year old Italian boy whose life was dedicated to the spread of devotion of the Blessed Eucharist through the power of technology. Blessed Carlo was beatified by His Holiness, Pope Francis in 2020.

The Most Reverend Columba Macbeth-Green as announced the building of a brand new K-12 Catholic College in Moama, located south of the Diocese. The college has been named in honour of the newly beatified Blessed Carlo Acutis, a 15 year old Italian boy whose life was dedicated to the spread of devotion of the Blessed Eucharist through the power of technology. Blessed Carlo was beatified by His Holiness, Pope Francis in 2020.

Read his story below and click on the Bishops Pastoral message for this new and exciting development.

Carlo Acutis died at the age of 15 of  a galloping leukaemia, leaving in the memory of all those who knew him a great feeling of emptiness and great admiration for his brief but intense testimony of  authentic Christian life.

From the day he received his First Communion at the age of 7,  he never missed an appointment with daily Holy Mass.  He always tried, either before or after the Eucharistic celebration, to pause before the Tabernacle to adore the Lord, always truly present in the Blessed Sacrament. Our Lady was his great confidant and he never failed to honour her by reciting the Holy Rosary every day. Carlo’s modern and up-to-date ways combined perfectly with his profound Eucharistic life and Marian devotion, which helped to make him that very special boy who everyone admires and loves.

To quote Carlo’s own words: “Our goal must be the infinite and not the finite. The Infinity is our homeland. We are always expected in Heaven”. Another phrase of his was: “All people are born as originals but many die as photocopies”. To move towards this goal and not “die as photocopies” Carlo said that our compass must be the Word of God, that we have to measure up to constantly. But to reach such a lofty goal very special measures are necessary: the Sacraments and prayer. In particular, Carlo placed the Sacrament of the Eucharist at the centre of his life and he called it “my highway to Heaven”.

Carlo was very gifted with everything related to the world of computers so that both his friends and adults with computer engineering degrees considered him a genius. Everyone was amazed at his ability to understand the secrets of computers that are normally only accessible to those who have specialized university degrees. Carlo’s interests involved computer programming, film editing, website creation, editing and laying out small publications, to helping those most in need especially children and the elderly.

This young believer of the Diocese of Milan was a mystery, who before he died was able to offer his suffering up for the Pope and the Church.

“To be always united with Jesus, this is my plan of life”. These few words Carlo Acutis, the boy who died of leukaemia, said outline the distinctive feature of his short life: living with Jesus, for Jesus, in Jesus. (…) “I am happy to die because I lived my life without wasting even a minute of it on anything unpleasing to God”. And Carlo asks of us the same thing: he asks us to spread the Gospel through our lives, so that each of us can be a beacon to light the journey of others.

From the Preface by Cardinal Angelo Comastri

Carlo, like many adolescents of our time was  busy at school,  with his friends, and for his young age was an expert in computers. In the midst of all his commitments he encountered Jesus Christ.

Carlo Acutis became a witness to the Risen Christ, he entrusted himself to the Virgin Mary. Carlo lived a life of grace and shared his overwhelming experience of God with his peers.

He received the Eucharist every day, he attended Holy Mass devoutly daily and would pause for hours in adoration before the Blessed Sacrament. His experience and Christian maturity testify to the truth of Benedict XVI’s words in the Apostolic Exhoration Sacramentum Caritatis: the sacrifice of the Mass and Eucharistic Adoration strengthen, support,  develop love of Jesus and the  availability to ecclesial service.

Carlo also nourished a special devotion to Our Lady, to whom he faithfully recited the Rosary, and feeling her motherly love, he offered her acts of mortification.

This teenager sociologically similar to his school mates, was an authentic witness that the Gospel can be lived fully even by a teenager.

In his short life, oriented to that encounter with Jesus, was like a light not only to shine on the path of those who knew him, but also of those who will come to know his story.   I am sure that this first biography of Carlo Acutis, edited by Nicola Gori, with his well known ability to involve the reader, will help today’s adolescents, so problematic and so conditioned by the Mass Media, to reflect on the meaning of life and on the Gospel values to realize it fully.

Looking at this teenager as their peers, who felt attracted by Christ’s friendship, and for this very reason experienced a truer joy, our children will be put in touch with a life experience that has not taken anything away from the wealth of young teenage years, but has enhanced them even more.

Carlo’s witness to the Gospel is not only an incentive for today’s  adolescents, but it also helps parish priests and teachers to question themselves about the value of the formation they give to young people of our parish communities and how to make this formation effective and incisive.

Taken from the Foreword by H.E. Michelangelo M. Tiribilli